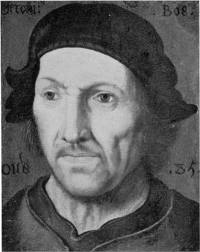 Hieronymus Bosch was born in 1450 in what is present day Netherlands. His name derives from his birthplace. Little is known today about Hieronymus Bosch, because he left no letters or diaries. Everything about him has basically been taken from references in multiple records and books. Today, we don’t know what Bosch thought about his art pieces or how he felt about art. He was a dutch painter known for his use of fantastic imagery to illustrate moral and religious concepts and narratives. Bosch lived his entire life in a city in the Duchy of Brabant. His grandfather was a painter and had five sons, which four out of those were also painters. It is said that Bosch's father was an artistic guide for a religion group, Brotherhood of Our Lady. The first record that Hieronymus Bosch is mentioned in, it says he has two brothers and a sister. When Bosch was a young teen, it is said that he might've witnessed a fire that took place where he lived in 1463, which destroyed many buildings and homes. Once Bosch turned 18, he joined the religious group that his dad was an artistic guide for. Some say that this religious group influenced what he painted, because he did included religious aspects. Later, he married Aleyt Goyaerts van den Meerveen.  The only reason we know when he died was because the religious group that he joined, Brotherhood of Our Lady, recorded his death. He died August 9, 1516.

Bosch's father was also a painter. Since, his father was a painter, he is said to get a lot of his skills and techniques from his father or uncle. Even though Bosch's father and uncles were painters, none of their works have survived. Hieronymus Bosch's most famous work is the Garden of Earthly Delight, a triptych. A triptych is a painting on three panels, which usually show a sign of relief. This painting had bursts of colors and odd architecture, which caught the peoples attention. Also, he decided to throw in some unusual creatures and interesting landscapes. Even though he painted some unusual items, he still included some religious aspects. In this painting he included God, Adam and Eve, and the terrors of Hell. It is said that he wanted to remind the people that you could really go to Hell and be punished for eternity. He was the first surrealist painter, even though it is said Salvador Dali, born four hundred years after Bosch, is the creator of surrealism. Surrealism was a new style of art, which was basically fantasy and dreams. It was not meant to be understood or comprehendible and could include anything you could imagine. Since dreams include nightmares, a lot of painters decided to paint scary creatures that they saw or imagined. His work was remarkable and sometimes a little crazy, but they were beautiful and creative. People during his time didn't necessarily understand his work and thought it was absurd, but he inspired a lot of painters.

Hieronymus Bosch is known for his paintings of amazing and wonderful pictures, but also how he decided to use a lot of medieval symbols in his works. He painted several triptychs, which he looked beyond the surface and looked into the human mind to illustrate majestic symbols of life. Hieronymus Bosch was said to be influenced by medieval acts and beliefs, but others thought that his work was sometimes just to amuse people. Also,  Bosch was known as the creator of monsters and chimeras, which are fire-breathing female monsters with a lions head. Bosch painted some different things that just came to his mind, so some people described his work as strange and interesting. Some people say that some of his creatures and strange images he created are to be seen as a precursor of surrealists. The style that Bosch used was one that was different from what others were painting during his time, so his paintings got some attention and some were popular during his time.

Sadly, Bosch never dated his paintings and signed only a few. Other people may have forged his name on some paintings, so there aren’t certain which pieces are truly pieces of the great painter, Hieronymus Bosch. Also, fewer than 25 paintings still exist that can give credit to Bosch. When artists study his work now, they see them as less fantasy and more religious type of work. People say his work was to teach people religious studies and morals. Some say that some of his work were translations of metaphors used in the Bible.

Bosch was one of the first european painters to paint about everyday life, which inspired and influenced other artists during this time period. Since he used strange creatures and unique designs, he is still thought of a precursor of surrealists. Also, he drifted away from the normal style of art that other artists were painting during his time and decided to go his own way. His own way included painting fantasies and unique and scary creatures and things, such as plants or buildings. This inspired other artists to create their own routes and paint whatever they felt or imagined. Plus, Bosch added a touch of symbolism to his paintings, which make his paintings hard to understand, but maybe that is what he wanted. It seemed that Bosch kept up the old tradition of the gothic style, which caused him to stand out in this new age. He was alive when the towns were just coming out of the Dark Ages, so this influenced some of his paintings. His work expressed life as he saw it and this influenced others to do the same. He saw the little things in life, such as gargoyles and mini carvings, and decided to bring them to life in paintings. As an artist, he let the horrors he saw everyday spill out onto his paintings, which was creative and different for his time period. Bosch inspired many artists and painters during this time period to paint what they imagined and felt, so he started something new and should be proud. Also, he inspired and influenced the new style of art, surrealism, which is very important even if some people don't give him credit for it.

The Garden of Earthly Delights 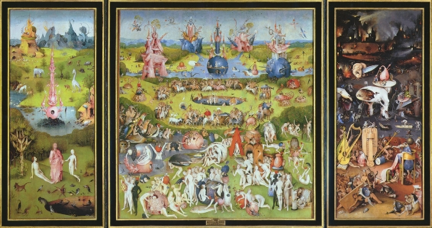 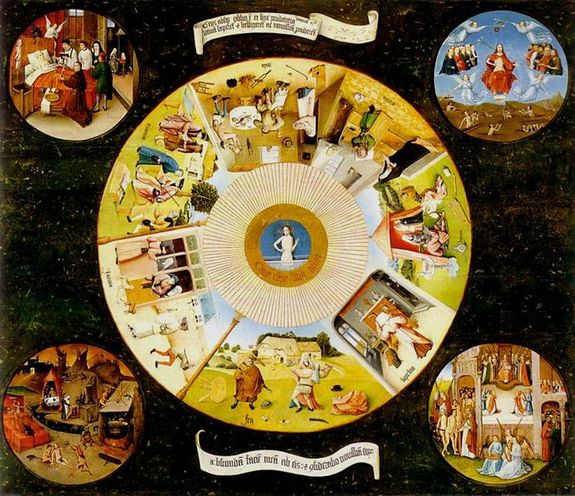