Botticelli was born under the name of Alessandro di Moriano Filipepi in 1445 in Florence. Today, not much is known about his childhood. At the time of his birth, his parents were considered very old to be having a child. His mother was around the age of forty and his father was fifty. It is thought that Botticelli was sick most of his life due to older age of his parents. His father was a tanner, but Botticelli did not follow in his father’s footsteps. He apprenticed a goldsmith, thought to possibly be his brother, and gained the nickname Botticelli, which means “little barrel”.  During his apprenticeship, he learned engraving, chasing and enameling, but he was very ambitious to become an artist.

In 1460 at the age of fifteen, Botticelli began training under Fillippo Lippi, a highly respected and known artist in Florence. During his training he learned the techniques of composition and fresco painting in addition to the grinding and mixing of various paints.  Even after opening his own workshop in 1470, Lippi’s influence can be seen in the decorative details, 3-D forms, communicative facial expressions, and gestures in Botticelli’s works. Once he opened his own workshop, Fillippo Lippi chose him to train his son, Filippino. Then together the two joined the Compagnia de San Luca, patron of the painter's guild.  In 1475, Botticelli painted the “Adoration of the Magi”. This painting established Botticelli's fame in Florence, and is often considered the peak of his early artistic works.  The painted featured Botticelli, Cosimo de Medici and other important figures in the Medici family, even though another patron commissioned the work.

In 1481, Pope Sixtus IV summoned Bottecilli along with other great painters, Pietro del Perugino, Domenico Ghirlandaio, and Cosimo Rosselli, to decorate the walls of the Sistine Chapel with frescos. He painted frescoes depicting scenes from the Life of Moses, the Temptations of Christ, and the Punishment of Korah along with a number of papal portraits.  His work in the chapel shows how highly regarded he was around this time, and it is the only occasion he is known to have worked outside Florence.

After Botticelli gained the patronage of the Medici, he painted some of his greatest works. “The Primavera”, one of Botticelli’s masterpieces was commissioned by the cousin of Lorenzo Medici. He completed the Primavera in 1482 after returning to Florence from working in Rome. The picture celebrates the arrival of spring and is the first work of Botticelli that uses mythological symbolism and stories. “The Birth of Venus”, perhaps Botticelli’s greatest work, was also commissioned by the Medici’s and was hung in their country villa. Simonetta Cattaneo de Vespucci is thought to be the model for Venus. Since Botticelli used Simonetta as a model in several of his other works, it is thought that he was in love with her. Although she was already married, Botticelli did not care, he expressed that he did not care for marriage anyway. Simonetta died at the age of twenty-two and Botticelli stated a wish to be buried at her feet when he died. Botticelli’s painting of Venus rising from the sea, floating on a seashell, is one of the most recognizable images in art history to this day.

Other works by Botticelli include “Venus and Mars”, “Pallas and the Centaur”, "The Mystical Nativity", and “Virgin and Child with Angel”. Sadly, Botticelli fell under the influence of the preaching monk Savonarola, who held strong Augustinian views. He became a dedicated follower of Savonarola, and it is thought he destroyed some of his paintings in Savonarola's notorious Bonfire of the Vanities on February 7th 1497. The bonfire burned objects of sin, such as songs, books, manuscripts and artwork deemed to be immoral. Luckily Savonarola was deemed a heretic by the Catholic Church and burned to death in 1498. Unfortunately, the most of the details of the last part of his live remain a mystery. Sandro Botticelli died on May 17th 1510 in Florence after many years of being unable to paint. After his death much of his art was overlooked only becoming prominent again in the nineteenth century. His work had an influence on the Pre-Raphaelites and Art Nouveau. 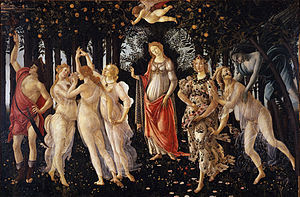 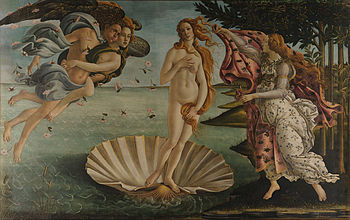